The soloist from rock band The 69 Eyes thinks that the traditional trinity of home, religion and fatherland is a beautiful thing. Another important trio is faith, hope and love.

I WEAR A CROSS AROUND MY NECK. SOMEONE ASKS IF IT’S THE WRONG WAY UP.

In the music video, a horned devil licks blood from its lips. A woman in a tight leather outfit caresses her demonic horns. A man in a skeleton jacket sings about how Lucifer dances around a hospital bed.

The band is The 69 Eyes, the song is Two Horns Up, and the visiting singer (the one licking blood) is Cradle of Filth soloist Dani Filth. The singer in the skeleton jacket is the group’s frontman and lyricist Jyrki 69, whose real name is Jyrki Linnankivi.

You can watch the video here.

When Linnankivi is not in Germany or the United States singing in his deep bass tones about vampires, devils and beautiful women, he usually wakes up on Sunday mornings in his home in Helsinki.

At ten o’clock, he tunes in to the Yle 1 radio station to listen to songs about other kinds of spiritual beings.

RELIGION IS SOMETHING THAT CALMS ME.

“In the name of the Father, the Son and the Holy Spirit.”

Listening to worship gives Jyrki Linnankivi a safe feeling, he says. He got into the habit as a child.

“And every weekday at 7:15 am I listen to the morning service. I like to listen to it. It gives me good thoughts,” Linnankivi says.

When Linnankivi began to write lyrics in his twenties, the ideas came from comic books, horror films and “a few girls who I had asked out on dates”.

The same themes are still present in the fifty-year-old’s lyrics.

“They express youthful joy, non-judgmentalism and madness. I want to hold on to those things.”

The 69 Eyes would not exist if Vernon and Gladys Presley did not have a boy in 1935 whom they named Elvis.

In the 1970s, seven- or eight-year-old Jyrki Linnankivi listened to Elvis on the radio. By chance, The King was performing a half hour of gospel music. Jyrki pressed the record button on his tape recorder.

“My first taste of Elvis was a tape of gospel songs – that really rocked,” he says.

IF SOMEONE SAYS THEY’RE AN ATHEIST, I RESPECT THAT.

When The 69 Eyes tour in the United States, Linnankivi likes to stop off at highway cafes and stores frequented by truck drivers. This is the heart of American working-class culture.

“What do they sell there? Air fresheners and T-shirts, always with three themes: eagles, skulls and the devil.”

To Linnankivi, this is the key imagery of rock and roll. The eagle represents freedom and America, the land of opportunity. The skull symbolises the fact that one day we will all be six feet underground. The devil, for his part, is what plagues people.

But the cross also has its place in rock iconography.

This was the case not only for Elvis but also for Johnny Cash, Linnankivi’s other great idol. Christianity and gospel are intertwined in early rock.

And sure enough, Linnankivi wears a silver cross around his neck.

“When we played in Germany the first time around 20 years ago, I had a cross around my neck. Someone asked if it was the wrong way up. I was really offended. How could somebody ask something like that!” Linnankivi recalls.

“Oh well, everyone has their own view.”

We went to the church, but I didn’t see a single angel

So why does Linnankivi wear a cross? There are at least three reasons.

The first is simply that it’s cool. It represents rock ’n’ roll. In that respect, it is a symbol just like any pop culture symbol.

The second reason is that Linnankivi is from Finland. He loves his homeland.

The third reason is that it provokes discussion.

“If someone asks, I tell them that I received an Evangelical Lutheran upbringing. As a child, I was in the church boys’ clubs and camps. They contributed to developing my values.”

Linnankivi compares himself to shock rocker Marilyn Manson. For Manson, religion was a source of anguish, deceit and fear, something he rebelled against in his music. When Linnankivi went to Stockholm in the 1990s to hear him play live, Manson tried to shock the crowd by ripping up a copy of the Bible.

Manson obviously did not know his crowds, Linnankivi reckons.

“But unlike Manson, for me religion is a haven.”

Linnankivi belongs to the Lutheran church and considers himself a Christian. In touring the world, he has met fans with all sorts of worldviews. Different things are sacred to different people.

Respecting what others hold sacred is important, Linnankivi says.

“If someone says they’re an atheist, I respect that. Maybe they will miss experiencing certain things, but everyone chooses their own path.”

HELSINKI CATHEDRAL WOULD NOT EXIST IF JERUSALEM DID NOT EXIST.

The screen shows a cross, a star of David, the Hindu om symbol and the half-crescent of Islam. There is Christ collapsing under the weight of the cross, the dome and minarets of a mosque, and the flag of Israel and the Wailing Wall.

Linnankivi filmed the video for the song Jerusalem when visiting the city for the first time.

You can watch the video here.

“Jerusalem is an amazing city. It’s unbelievable that it’s still one of the most important cities in the world,” he says.

“There are the great religions within walls that are thousands of years old. And what happens inside those walls is directly reflected in the wider world.”

It’s cold and wet in Helsinki. Through the cafe window, Linnankivi points to Helsinki Cathedral, the Finnish Evangelical Lutheran cathedral.

“That would not exist if Jerusalem didn’t exist.”

Helsinki Cathedral is important to Linnankivi. It was the church of his childhood. When Linnankivi was around the age of four, his mother said they were going to church to see the angels.

“We went, but I didn’t see a single angel. My mother meant the golden statues. I was a bit disappointed.”

Around forty-five years later, Linnankivi still likes to visit churches around the world to see angels He wonders about tourists who start to take pictures on their smartphones as soon as they enter a church.

“They do that rather than being quiet and experiencing the peace of the church. That’s the same thing as someone standing in the front row at a rock concert watching it through their smartphone,” Linnankivi explains.

“The spirit of a concert doesn’t come across through on video, no matter how you wish.”

Linnankivi would like to study theology or art history. He has studied chemistry and other subjects at the University of Helsinki in the past, and a couple of years back he studied French for the high school exam.

“People are always amazed in other countries when a rocker has an academic side to them. I tell them that Finland is a wonderland where people can study for free.”

They think that when you’re a rock star, maybe you can give support in some way.

Although the vampire goth rock of The 69 Eyes seems bleak, according to Linnankivi, the songs have a message of hope.

That is also the case on the band’s new West End album, on the single Two Horns Up. It is in the video for that song that Satan is licking blood. The lyrics continue: “Two horns up / Never let it go / You got a gift of life / Never live it slow”.

Linnankivi points out that some of the band’s songs are almost gospel. “I commit sins everyday but I never give my soul away / ’Cause I still got some respect for you in the end,” Jyrki 69 sings on Only You Can Save Me. “Only you can save me, Lord.”

Could it be just a coincidence that Only You Can Save Me is the final song on the Devils album?

As Linnankivi sees it, one of the biggest curses of the modern world is rootlessness. It can lead to desperation. Young people come to seek consolation from music – and from the rock star Jyrki 69.

“They think that when you’re a rock star, maybe you can give support in some way.”

Linnankivi himself received a good grounding in his childhood. In his opinion, the traditional trinity of home, religion and fatherland is a beautiful thing. Finns have a good standard of life thanks to the efforts of previous generations. Good manners are important, elders should be respected, and people should value their roots.

Christian celebrations are also important to Linnankivi. He thinks it’s important for everyone to stop and take a break, even if they don’t believe in the deeper significance of religious holidays. The 69 Eyes never play at Christmas time.

FAITH IS A UNIFYING FORCE IN A WORLD OF DISORDER AND CHAOS.

Another important trio is faith, hope and love. Linnankivi intends to write a book about these.

“I have a fear of flying, and when the plane takes off, I sit with my hands crossed.”

Faith is also a unifying force in a world of mayhem, disorder and chaos.

Hope goes hand in hand with faith. For Linnankivi, hope is a flame that faith keeps alive, and which must not be allowed to go out. It is a force that keeps people going, no matter what the situation.

Love, on the other hand, is fuel to the fire of hope.

Then Linnankivi laughs. He’s afraid of sounding like a preacher. That’s not his intention.

“You had better put plenty of skulls and devils in that article!” 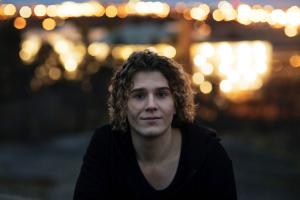 Sakari Hukka, 21, fasts, meditates in the morning and runs under the stars – generation Z is spiritual in its own way 25.2.2020